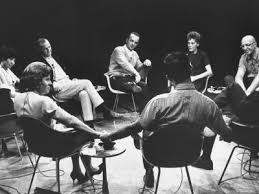 Founded in 1955 by Henry Guze, Jules Barron, and Albert Ellis, the American Academy of Psychotherapists was one of the first professional organizations to bring together practitioners of different disciplines who were interested in innovative clinical practice. From its inception, the American Academy of Psychotherapists has been dedicated to the theoretical premise that the person of the therapist profoundly impacts the course of therapy. This belief has been consistently grounded in ongoing study of actual clinical experiences. AAP was one of the first organizations to require personal therapy of applicants for membership, believing this fostered “collegiality, a mutual respect, and a readiness to trust” in the words of Carl Whitaker. Henry Guze explicitly stated that he wanted to create an organization for “the care, feeding, and protection of the souls of psychotherapists,” and the Academy still attempts to fulfill that role for its members today.

Carl Rogers, the first president of the Academy, along with Carl Whitaker and other founding members, forged the direction of the Academy by developing the first Summer Workshop where therapists worked with patients in front of other therapists and then processed the experience afterwards. Over time, Academy members began to demonstrate their work in process groups with each other as well, providing opportunities for intense personal and professional growth. Initially these groups met only during the course of one meeting, but eventually the same members began to reconvene over several meetings to deepen the work that could be accomplished. In time, these ongoing meetings resulted in the development of the long-term peer groups that exist in the Academy today. Academy meetings are still replete with rich experiential workshops, along with process groups and more traditional didactic workshops and plenary sessions.

As times have changed in the mental health professions, the Academy has held true to its focus on the person of the psychotherapist, continuing to challenge therapists to personal and professional growth through authentic encounters and creative risk-taking. In response to forces that would overly concretize therapy, AAP has developed the Research on the Advancement of Psychotherapy (RAP) committee, which seeks to inform other therapists and the public about research evidence supporting the effectiveness of experiential, relational, and depth-oriented psychotherapy. The Academy has also recently developed the Scholars program, which provides financial support and clinical training to graduate students and new therapists. By receiving training and exposure to experiential and relationally oriented interpersonal psychotherapy at Academy Institute and Conferences, a new generation of psychotherapists has the opportunity to carry on and extend the vision of the founders of contemporary psychotherapy.

In 1964 at the AAP Conference held in New York City, recognition awards were given for the founding of the Academy to Henry Guze, Jules Barron, and Albert Ellis. It is important to note the earlier history of the Academy and the dual influences of both the profession of psychoanalysis and the political climate of the 1950’s United States.

Henry and Jules both taught at Long Island University and they commuted together by car, sharing ideas and aspirations along the way. At that time psychoanalysis was the only widely accepted form of therapy. Senator Joseph McCarthy was in his ascendancy on the national political scene, fomenting virulent forms of anti-Communism and anti-Semitism. Henry was a pioneer in furthering new ideas outside of traditional psychoanalytic psychotherapy, including the practice of therapy by non-physician psychotherapists, and he was concerned that a tidal wave of political oppression might impact multidisciplinary practice and less traditional theory development. Henry and Jules decided to gather like-minded colleagues together to discuss the future of a practice of psychotherapy that might be free from the ideological rigidity of the analytic community, as well as being capable of resisting the political narrowness of the far right that was saturating the overall climate of discourse in the county at the time.

In 1954, Henry Guze organized a meeting in Carl Rogers’ hotel suite at the Barbizon Plaza during the American Psychological Association convention. Attending this meeting were Henry Guze, Jules Barron, Albert Ellis, Carl Rogers, Rollo May, Harry Bone, George Dolger, and Jerome Schneck. In this meeting there was no clear consensus concerning what kind of organization the Academy should be. Henry Guze and Jules Barron, supported by Carl Rogers and others, wanted the Academy to be an organization that was a person-oriented forum, not only to exchange and discuss ideas in a friendly manner, but a place where one concretely could learn from each others’ ways of working and where one could get peer supervision and personal support for one’s own work as a psychotherapist.

Emphasis on the personal support of the therapist as well as intellectual learning was one of the unique characteristics of the Academy. By calling the organization The American Academy of Psychotherapists, the emphasis was on something rather unique for the psychotherapy profession – namely, the person of the therapist rather than theories and techniques.

Albert Ellis organized AAP’s first annual Institute and Conference at The New York Academy of Science in 1956. It was organized like a conventional professional conference with presentations of papers and discussions.

George Dolger, Henry Guze’s office partner at the time, chaired the first Summer Workshop, held in Madison, Wisconsin in 1957. An innovation of this workshop was attendees viewing other therapists interviewing patients from a nearby mental hospital. Also, based on Carl Whitaker and John Warkentin’s experiences of multiple therapy, at times several therapists would present their work together or in tandem with patients, taking the risk of opening themselves up to scrutiny by colleagues and reaping the rewards of their feedback. This was unheard of in most traditions of psychotherapy in the fifties, dominated as the times were by psychoanalytic notions of psychotherapy that kept what happened in the therapy room secret. At the Summer Workshops, therapy and the therapist were out in the open. And in the feedback of the sessions, therapists began relating how they worked to who they were as persons. This developed into the central dynamic of the Academy: therapy is based not on the theory, school, or technique so much as on the person of the therapist.

Over time, Summer Workshops also evolved into including experiential workshops and process groups where therapists began working with each other in groups to develop their own skills and capacities to relate as therapists and people. While initially these groups began and ended within a single meeting, some members developed ongoing peer groups, many of which have now existed for decades in the Academy. These peer groups provide a unique opportunity for experiential growth, learning, and support for development over time.

* This history has been compiled by AAP Historian Suzanne Timms from the writings of Earl Brown, former President of the Academy; Lars Hem from the Center of Psychotherapy; past issues of the Academy Newsletters; and articles from the Academy journals and memories of members.

Past Presidents of the Academy